Know more about the history and origin of Christmas toys that can be used as Christmas tree decorations and then given as gifts to children at the end of the Christmas party.
Christmas : Christmas Decoration : Christmas Toys

Christmas toys are popular as gifts and Christmas tree decorations. They are an important part of this festive holiday season and an interesting history to go with them. Clement Clarke Moore, a distinguished scholar of his times, read out a poem 'A visit from Saint Nicholas' written by him as a Christmas gift to his children on 22nd December, 1822. The description of Moore's St Nicholas was based on his plump and jolly-natured caretaker, Jay Duyckinck. A guest liked it so much that he copied it down and sent it to a New York Newspaper called as the 'Troy Sentinel'. A year later, it was published in it anonymously.

The merry, long-whiskered elf descending down the chimneys with a sack on his back and filling up the stockings of good children with toys became so popular that it became an inseparable part of Christmas forever. Later the Moore's poem was published in a book in 1844. A few years later, when the toy industry emerged, Santa toys grew most popular for Christmas. Many of the early toys are prized possessions of the antiques' market, especially the old tin toys that were first produced commercially in 1848 by the 'Philadelphia Tin Toy Manufactory'. These toys were hand-painted and stenciled. 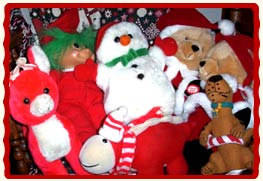