Stories, Legends and Tales of Christmas are quite interesting and have hidden morals to learn from. Most of these stories tell us to love all living things and show kindness to them.
Christmas : Christmas Stories

Here is a collection of stories about the birth of Jesus Christ, the Three Wise men and Santa Claus. There are other anecdotes that tell us about the popular Christmas symbols and traditions and their origin such as hanging the stockings on Christmas Eve, Rudolph the Red-Nosed Reindeer, Evergreen Trees, Holly, Ivy and Mistletoe and many other things frequently used and done in Christmas season.

Legend of Baboushka
The Russian version of St. Nicholas is Baboushka meaning 'grandmother' in Russian. The character had been much popular in old Russia before the revolution of 1917.

Legend of the Candy Cane
Candy canes are favorites of Christmas decorations amongst kids. These red and white J-shaped candies are tasty too. It is said that their origin lies in an event in Cologne Cathedra about two hundred thirty years ago. 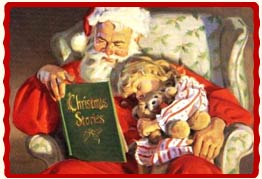 Legend of the Christ Child
There was a poor woodcutter who worked hard to make his ends meet and earn his earned his daily bread. He had a loving wife and two lovely children called Valentine and Marie. All of them helped him in his work, were obedient to him and pious in nature. They would daily read the Bible over the table, even if they had only a small loaf of bread to eat.

Legend of Christmas Angels
There were two angel friends. One used to sunset pink robes while other used to adorn himself with sky blue robes. They were known for singing sweet duets about glory of God and playing on pure silver trumpets.

Legend of the Christmas Rose
On the cold December night, everybody was coming to see their new Savior and brought Him all kinds of gifts and presents. The three Wise Men came in with their valuable gifts of myrrh, frankincense and gold and offered them to Baby Jesus.

Legend of the Christmas Thorn
In ancient times, soon after the Christ's death, Pontius Pilate persecuted Joseph of Arimathea. Thus, he had to flee from Jerusalem, the Holy Land. The only possessions that he carried with him was the Holy Grail (the dish from which Jesus drank during his Last Supper)

Legend of the Evergreen Trees
One winter, when the birds were all leaving for south and warmer areas, one little bird broke its wing on the way and was left behind. Soon frost and snow covered the forest and she was cold and hungry. So she asked the trees to help her and let her stay in its branches.

Legend of the Magi
Three Kings or the Wise Men are vital part of the Nativity scenes and birth of Christ reenacted in churches on Christmas. They traveled for miles to see baby Jesus and brought him the gifts of gold, frankincense and myrrh. Known as the Magi (scholars, priests or astrologers)

Legend of Mistletoe
Mystical power of mistletoe and the tradition of kissing under the mistletoe owe itself to the legend of Goddess Frigga and her son Balder. Frigga was the Goddess of Love and her son, Balder, was the God of the Summer Sun.

Legend of the Nativity
The story of Nativity reiterates the birth of Jesus Christ that probably happened over two thousand years ago. In the town of Nazareth, there lived a pure young woman called Mary, who was engaged to a poor but good man called Joseph, who was a carpenter by profession.

Legend of the Nutcracker
E.T.A. Hoffman wrote the famous ballet of the nutcracker, which was first performed in 1892. However, the story was considered to be too morbid for kids and thus, Alexander Dumas Pere rewrote it to infuse more optimism and happiness in it.

Legend of Poinsettia
Dr. Joel Poinsett, who was the first ambassador to Mexico, brought the bright red star-shaped flower to the United States. Hence, it was names as Poinsettia. It is also known as 'Flame Leaf' or 'Flower of the Holy Night'.

Legend of the Robin
While Virgin Mary was lying in straw beside her son in the manger on the chilly night of December when he was born, she was too tired and weak to get up and keep the fire to keep her son warm.

Legend of the Rudolph
A true tale about how Rudolph, the reindeer came into origin have been narrated here. Robert May was a poor copywriter in Chicago, living in a shabby two-room apartment. His wife Evelyn was suffering from cancer and was bedridden for two years

Legend of the Sage Plant
King Herod was outraged when he heard that the ancient prophecy of birth of the Messiah and future king of the Jews in his country. Since he didn't knew where to find Baby Jesus and kill him, this cruel and heartless dictator ordered his soldiers to find out

Legend of Santa Claus
Hundreds of years back, Nicholas was born to a wealthy Christian family in Patara in around 280 AD. The place is near Myra in modern-day Turkey. He was so kind and pious that he helped anyone who came his way

Legend of the Christmas Spider
Long, long ago, on one Christmas Eve, the spiders were banished from homes while the houses were cleaned for Christmas and their webs were broken.

Legend of Christmas Stockings
In yet another version of the story of Saint Nicholas lies the origin of the tradition of washing the stockings on the night before Christmas and hanging them up on the window sill or near the hearth, in readiness to receive gifts from Santa.

Legend of the Stork
Infant Jesus was lying in the manger in the stable in Bethlehem and all the beasts and birds of the world rushed to greet the newly born King of the world. They knelt down to pray and adore the beautiful baby.

Legend of the Thunder Oak
According to a Scandinavian folk tale, in the forests of the ancient Northland, there lived heathens who worshipped the war-god Thor. Human and animal sacrifices were offered to a giant tree known as the Thunder Oak that was considered the altar to Thor.