Christmas Celebrations in other countries and parts of the world are influenced by their culture, history and geographical position.
Christmas : Christmas Around The World

Christmas Around The World

Christmas is not only celebrated in American and European countries but is a popular festival in other parts of the country too. Read about the interesting Christmas celebrations in Iran, Yugoslavia, Egypt and Wales in this section that is heavily influenced by the regional and cultural influences of the country. Costa Ricans make the huge models of the stable, where the Christ was born, and they are often made as big as the room where they are kept so that the Christ can be as comfortable as possible in His Manger. Micronesians are mostly Protestant Christians and celebrate this day as the church family day, when all of them attend most parts of the day attending the local church services that include a message from every minister, lay preacher, and missionary in the area, singing carols and hymns and receiving gifts where strangely each recipient applauds himself while going to receive the gift. The most common church gifts here are two bars of soap.

The tribes of New Guinea were preached about the Holy Son of God who came to the world to establish peace by a Canadian missionary and his wife. Since then, they have started the custom of exchanging an 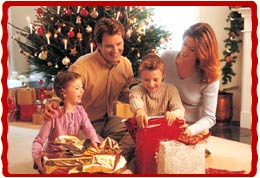 infant son among the tribes known as the Peace child. The adoptive tribe takes good care of the Peace child as his death means the renewal of wars and the end of the treaty of peace. Sicilians fast from the sunset of 23rd December to the sunset of 24th December and then kindle a huge Yule log and offer prayers and sing hymns around the 'Presepio' or the Crib before beginning the feast. The dinner table on Christmas Eve usually consists of eels and larks, boiled pasta, fish, sweet bread and Torrone. The kind witch called La Befana brings presents to the kids on 6th January and fills their stockings secretly to give them a surprise!