Christmas traditions, customs and rituals are important part of Christmas celebrations and are greatly influenced by the culture of the region.
Christmas : Christmas Traditions & Celebrations

Christmas traditions and customs have become increasingly commercialized, yet, the old-world rituals make Christmas a new alacrity every year and infuse true enthusiasm in the Christmas celebrations. The traditions that are followed mainly focus on the birth of Christ and the joy of the precious moment. The vast differences are mostly due to other regional influences and people may celebrate Christmas by reading Bible and scriptures or make it more musical or perform living nativity, but the main theme is to involve the children and let them know about why Christmas is celebrated and the preaching of Christ. Keeping up the custom of giving presents to this day commemorates the three Wise Men who gave precious gifts to Jesus.

Most of the Christmas carols sing about the Christ's birth and the nativity scenes and appearance of angel to the shepherds, the Wise Men and animals surrounding the baby Jesus. Cultural and historical influences have shaped Christian traditions, rituals and customs too. It is said that December 25th was chosen to celebrate the birth of Christ to lead people away from the Roam festival Saturnalia that was celebrated in December and was a time of feasting and parties, which are still a part of Christmas celebrations. The Yule festival of 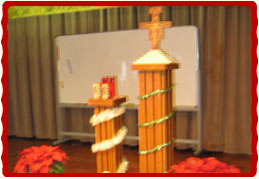 northern characterized by dancing around huge bonfires yelling for the winter to end has been replaced by burning of a Yule log in Christmas. The Christmas tree originated in Germany, reached other lands along with Germans while Saint Nicholas of the present-day Turkey has also become an important part of Christmas festivals with time.